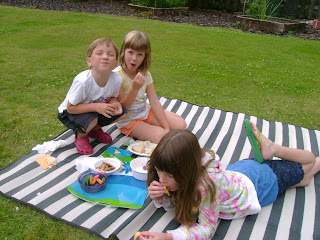 Picnic in "Park Grandma"
Posted by barbra at 2:19 PM 2 comments:

and how are you?

Today marks the end of our second week back at school. Well, not for The Boy, since his preschool starts this coming Monday.

I've been trying to stay in my "summer" frame of mind, and have been reasonably successful. "Don't let it get to you this year," I have been telling myself. "You feel much happier in the summer. Stay happy and just let the school-year frustrations roll off your back."

Eight days of school, and I've got to get this off my chest:

Fourth graders should not be bringing home every book and notebook in their desks every night. This teacher is insane. Hello? Got a clue? Requiring each child to purchase $150 in school supplies (including a 2-inch AND a 3-inch 3-ring binder) takes balls, I'll give you that. AND THEN, on top of that, sending the 3-inch binder home every night, saying "it's too big for your backpacks, so put your books in your backpack and carry your binder" takes - well, it takes a complete detachment from reality. Because, what has now happened, ON TOP OF ALL THE SCHOOL SUPPLIES, is that parents have been going out and spending MORE MONEY on rolling backpacks for these kids. And that just does not sit well with me.

As a teacher, I happen to think that teachers should plan out their class so that the kids use their textbooks at school and their workbooks (or worksheets) at home for further practice (also known as homework). Sure, maybe in grade 7 or so they'll start needing to bring textbooks back and forth. Yes, I expect teachers to think about what they are requiring of nine-year-old kids. It seems to me that if you stop and think about a classroom full of nine-year-olds carrying full backpacks AS WELL AS a THREE-INCH binder, anyone in their right mind would say, "that's just wrong."

An example of one night's homework this week:
- Using the Literature textbook, answer four questions in the workbook about the story we read during class today (took Big Girl 3 minutes)
- Do these 6 problems from the math textbook (5 minutes, if that)
- Do these 6 problems from the math workbook (5 minutes, if that)
- Start studying for the test on Chapter One in the Religion book (and be sure to bring this book back and forth between home and school every day this week)

FIVE BOOKS (plus that god damn binder filled with spiral notebooks - can't do 6 math problems on a loose piece of binder paper and then file it in the binder later, can we?) for 15 (maybe 20) minutes of homework???? Are you kidding me???


Summer frame of mind, where did you go?
Posted by barbra at 4:38 PM 6 comments:

living under the smoke

This Friday night sure feels different than the last Friday night. Last week, the fire was closer, there were visible flames and the smell of smoke in our house, and friends were leaving their homes (some were mandatory evacuation, some voluntary) to sleep where they could breathe. Today, the air quality has improved to moderate, the fire and smoke have moved east of here, and friends are home safe.

Last Saturday, Sunday, and Monday, the smell of smoke was unbelievably strong. The huge pyrocumulus cloud over the mountain was towering above us, with its base of gray-brown-orange and its top of fluffy bright white. It was mesmerizing. It was eerie and ominous. It was strangely beautiful.

The smell of smoke was so overpowering that I woke up Sunday morning nauseous and headache-y. The temperature outside was over 100 degrees, so we had the central air running all day. That filtered the air so that we could tolerate it. We could not stand to be outside. The AQMD listed the air quality as "hazardous." 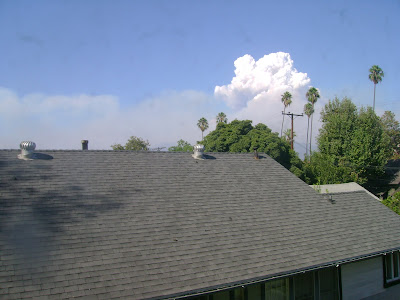 Tuesday was a little different. The smell of smoke was not as strong as it had been. I could not see a pyrocumulus cloud, just grey cloud cover. Except it was not cloud cover, it was the smoke formation on top of us, so that I couldn't see it looking up into it. It stayed that way all of Tuesday, Wednesday, and Thursday. Finally on Friday (this morning), we woke up to blue sky over our house! And we could see the smoke cloud again, over to the east a bit. 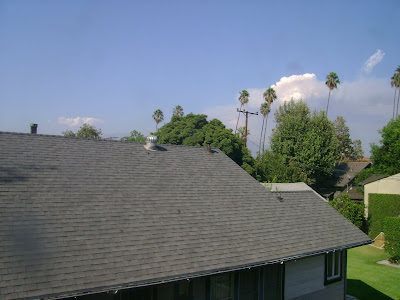 On Wednesday morning I heard on NPR that the fire crews had done some work in the hills in our old neighborhood! The Boy and I took a drive up there to see what was going on, since we couldn't see the mountains from our new house through the smoke cover. The fire crews had bulldozed a fire line straight up the mountain from the our old neighborhood. It was 20-30 feet wide, and very striking. (Of course the photo is very hazy from the smoke!) 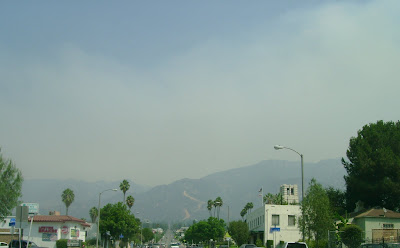 The fire was still on the north side of the ridge, and evacuations had not been ordered for the area, so our old neighborhood looked fine. We drove a bit farther east to do some errands, observing the smoke plume along the way. 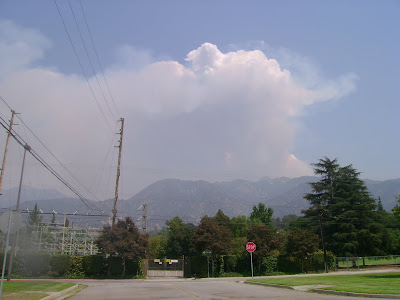 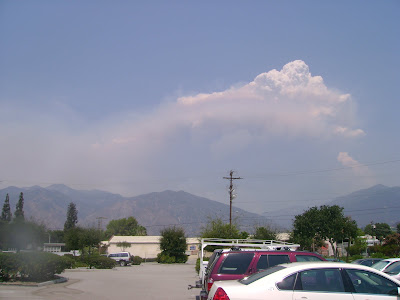 I stole the following images off of the internet (taken with good cameras!): 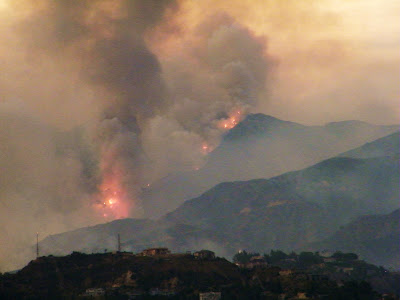 The view of the mountain last weekend. Taken by Laurie. 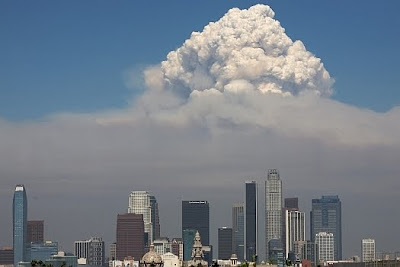 A picture taken from south of downtown Los Angeles. Normally, the San Gabriel Mountains would be the backdrop of this photo! (I think I found this picture in the scpr.org photo gallery.)
Posted by barbra at 11:58 PM 3 comments:

About (Not Just) Me